In addition to liberating the world from the burden of ornament, Adolf Loos boasted of having launched a Copernican revolution in architecture with his concept of the Raumplan. In the past, he claims, “mankind was unable to think in terms of space, and architects were compelled to make the bathroom as high as the salon,” but “as man will one day succeed in playing chess with a three-dimensional board, so other architects in the future will also solve the plan in three dimensions.”

(*1959 in Helsinki; †2013 in Vienna) was a Finnish architect, architectural theorist, historian and university teacher. One of his appointments was as Professor for Architectural Theory at Vienna University of Technology.

ELEMENTS OF
A DESIGN STRATEGY

So far, mankind at large seems to have failed Loos’ expectations. The Raumschach game, as introduced by Ferdinand Maack in 1907, never made it big, and today most people know three-dimensional chess only from old episodes of Star Trek. Fortunately, however, there are architects who have lived up to the second part of the Loosian prophecy. Delugan Meissl Associated Architects are among those few who really do play architecture on a three-dimensional board: their designs live from the section even more than the plan.

A striking demonstration is the recent design for the Victoria & Albert Museum in Dundee, Scotland. The building sits at the waterfront on an impossibly small footprint like a giant glacial erratic, with its 40-metre cantilevers outperforming even the wildest dreams of Oscar Niemeyer. But the ground is not a natural given either, but rather a construct. The architects extended the public plaza offshore into the River Tay estuary, and folded it so as to provide access to the main building hovering above it. Thus a public square turns vertical inside the building, with all the functions grouped around this ‘public void.’

A similar sectional concept animates the film museum in Amsterdam. Anchored on the north bank of the Ij, across the water from the city’s central train station, the building eclipses its tall neighbour, the Overhoeks Tower, with its crystalline brilliance. Inside, four screening rooms, a study centre, a library, a restaurant, a shop and workspaces are grouped around a large crater-like atrium, or ‘arena’ that offers several stages for the performance of urban life.

Delugan Meissl Associated Architects are among those few who really do play architecture on a three-dimensional board: their designs live from the section even more than the plan. 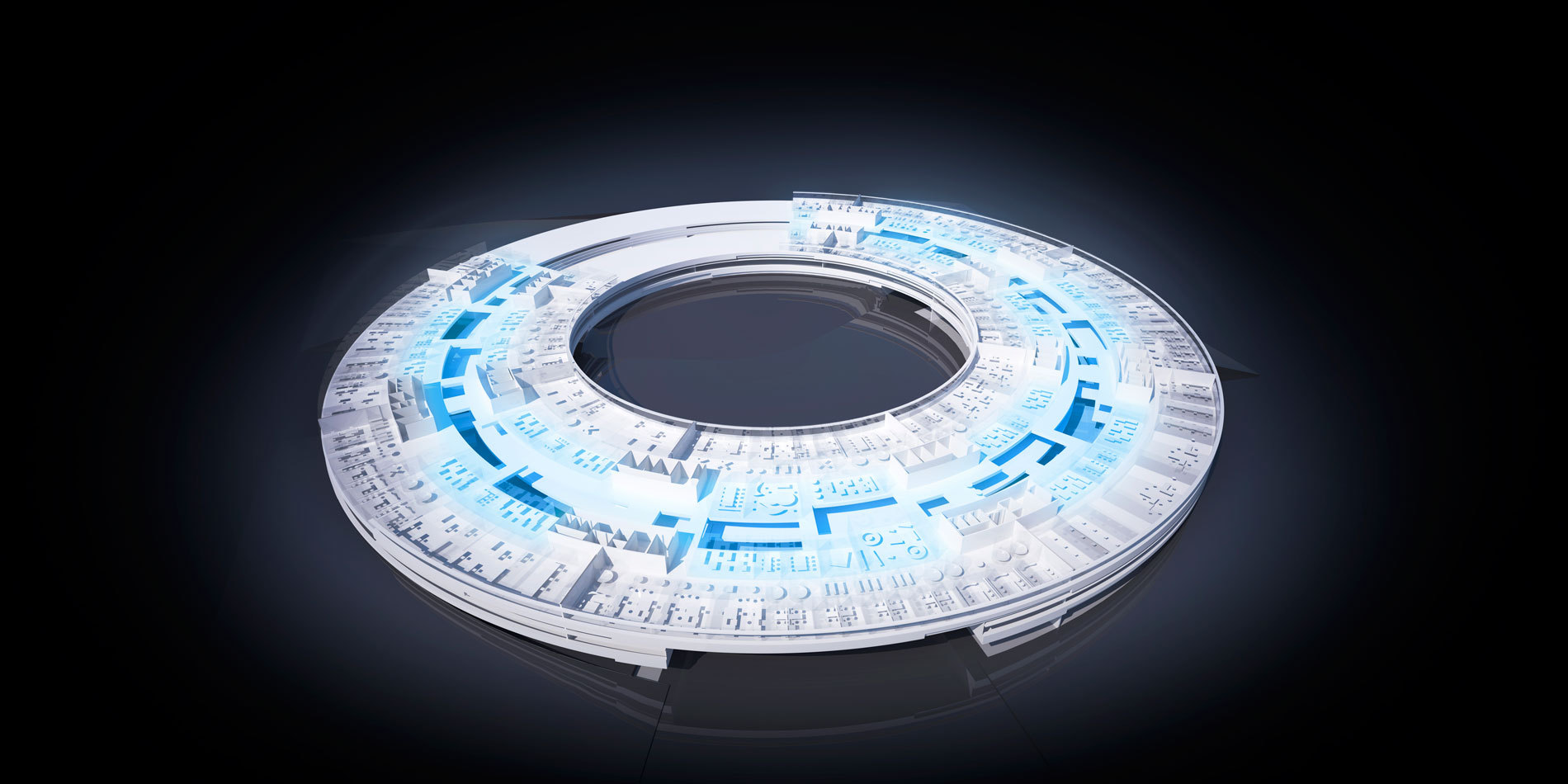 While from the outside these large buildings look like abstract sculp­tures, the interior opens up artificial landscapes with broad perspectives, tilted planes, massive staircases and wide balconies. Indeed, the shaping of the building according to a landscape model is a recurring theme in the work of DMAA, whether we think of their office and apartment building on the Wimbergergasse in Vienna or the unrealised panorama lift for Salzburg with its carefully orchestrated ascent to the top of the hill. Even without the death-defying cantilevers of the larger projects, the steely gymnastics of House Ray I and the private house RT form artificial land-scapes, the latter one becoming literally part of the steep hill.

The effect of DMAA’s interiors does not only rely on the formal qualities of their dynamic topography. Rather, the redefinition of the ground datum is a powerful device because it engages the viewer more directly than any other formal manipulation. As we are normally limited to operating on a more or less horizontal plane, we are acutely aware of the vertical positioning of the body.

The architects also seem to make use of the principles that the British geographer Jay Appleton characterised as ‘prospect’ and ‘refuge’. Building upon Burke’s theory of the sublime and Darwin’s theory of evolution, Appleton suggested that the ability to see, a prospect, and the ability to hide, a refuge, are important in calculating a creature’s prospects for survival at both the human and the sub-human level. He further articulated four different kinds of prospects: the wide view of a panorama vs. the framed view of a vista, and indirect versions of both, such as a secondary panorama from a tower or a deflected or offset vista from a break in a hedge. Analogously, the refuge can take many forms. The interplay between refuge and prospect – one small and dark, the other expansive and bright – is one of those aspects that run through the entire DMAA portfolio, from private houses and apartments to large public buildings. Instead of a formal system, the office tends to view architecture as a stage for actions. In particular, the conditions of entering, traversing and viewing the building are carefully arranged, linking spaces together through a situated gaze.

Performative
Performativity is crucial to the work of DMAA. In particular in their public buildings, it is clear that the design is not derived from an analysis of site, programme or typology; instead, the context, the activities and the types are really effects of the architecture. Before it is constructed, we don’t even know what a DMAA building is capable of because the architectural intervention affects cultural perceptions and social conventions. The performative qualities are also enhanced by the shapes of the buildings. In addition to its beauty, the complex folded geometry functions much like the sculptures of Robert Morris and other minimalists in the 1960s: by constantly transforming itself, the shape invites the viewer to explore the building from all perspectives.

For an early critic of minimal sculpture, Michael Fried, such interdependence of the work and the viewer actually compromised the purity of art. He argued that minimalist pieces are implicitly anthropomorphic, confrontational and “theatrical” in that they implicate the scale of the body of the viewer and require him to complete the web of relationships projected by the work. If we try to apply this discussion to architecture, however, it soon becomes clear that the aspects of theatricality which Fried criticises in minimalism – including the commingling of the space of the viewer and the space of the work, the temporal unfolding of the experience of the work and the somatic apprehension of scale – are the very stuff of architecture, especially as regards the projects by DMAA.

Physiology
As opposed to many contemporary practices that try to ground their work on extra-architectural theories, DMAA operate with literal, as opposed to depicted, shape. This approach derives its force from a visceral juxtaposition of the human body with the architectural setting where the meaning of the form is in the action it generates. In a way, then, the office approaches the kind of physiological aesthetics promised by Nietzsche.
Despite the spectacular appearance of many DMAA projects, their architecture does not work solely for the eyes but rather organises the speeds of moving bodies. What counts in the experience of space is the body as a system of possible actions, and, as Maurice Merleau-Ponty used to say, “my body is wherever there is something to be done.” That is why space cannot be thought of without reference to body, function and time.
To take a simple example of the physiological approach, consider a project from 2004, the city lofts in Wienerberg in Vienna. The façades suggest an interest in the skin of the building as an independent element and present a skilful investigation into contemporary ornament. Still, what is most significant in the building can be best appreciated in section. Instead of stacking identical, 2.50 m high floors on top of each other, the design combines zones with different floor heights into a complex, interlocking Raumplan, allowing the height of 3.40 m for living areas on the southern side of the building but using 2.40 m for more intimate zones of relaxation or sleep in the north. An unusual variety of apartment types and spatial conditions result from this apparently simple concept that responds to the functional, physiological and anatomical requirements of the body.

The interplay between refuge and prospect – one small and dark, the other expansive and bright – is one of those aspects that run through the entire DMAA portfolio, from private houses and apartments to large public buildings.

The sublime
Although DMAA can be said to have turned Fried’s critique of theatricality around, there are many big differences between architecture and sculpture, and one has to do with scale. As Edmund Burke recognised in his theory of the sublime, published in 1757, vast size opens up a whole new set of aesthetic effects, in particular the experience of the sublime. While huge dimensions always tend to evoke the sublime, Burke argues that height is much more effective than length or breadth, because it confronts and thematises the physiological limits of the human body, and a gigantic cantilever – as in the Porsche Museum or the Darat King Abdullah II House for Culture and Arts, for example – that resists the forces of gravity in a way we never encounter in nature certainly produces the most radical of such effects.

Claiming that the experience of the sublime was the strongest emotion that the mind is capable of feeling, Burke further explained that “the mind is so entirely filled with its object, that it cannot entertain any other, nor by consequence reason on that object which employs it.” However, it is not the object that would be sublime in itself. Instead, the effect is created by the human mind confronted by something that resists definition. For Burke and Immanuel Kant, the sublime is not classifiable or determinable: it arises from the attempt to present the unpresentable, the invisible within the visible. That is why architecture that aspires to the sublime must reject figuration, representation and indexicality, as well as other impediments of memory, association, nostalgia, legend, or myth. The spirit of our times, according to Jean-Francois Lyotard, is surely “that of the immanent sublime, that of alluding to the non-demonstrable.”

Skin
Since the work of DMAA is so involved with the effects of the sublime, one should not look for a hidden meaning, a secret, that criticism should dig out and bring to the open. The walls of their buildings are not hiding anything behind them: instead, they are the secret. In a paraphrase of Paul Valéry, we could suggest that the deepest in the architecture of DMAA is the skin.

In recent years, architecture has increasingly faced the danger of being reduced to a mere design of attractive surfaces (with or without a media façade). At first glance, DMAA’s experiments with ornamentation, as in the housing projects on the Wimbergergasse or Paltramplatz, seem to betray a similar interest in two-dimensionality. However, for them, there can be as much real architecture in the skin as in the urban strategy or overall building shape: also the skin is a tool for organising spatial and social relationships, not just a delimiting surface or a billboard.

While a sculpture functions as an object of visual observation from the outside, architecture provides not only external aesthetic qualities but also thresholds that allow or deny access to the interior. The skins that open and close architectural spaces define levels of publicity and privacy by filtering visual, acoustic, physical and other connections. As with biological organisms, the architectural skin is in reality not a two-dimensional surface but in many of their projects rather an organ that defines a space in itself. One of the secrets of DMAA is their ability to apply the same principles and the same three-dimensional thinking across scales and materials, simultaneously focusing on both aesthetic appearance and the performative force of every element.